The Benefice of South & West Lynn

The old medieval parish of  South Lynn was a long rural area stretching from the Millfleet [Sunolf's Fleet] to Saddlebow [Seche Parva] in the south. The lord of the manor before 1066 was King Harold. For centuries incoming traffic turned left at the South Gate remade in brick in 1438. Bishop's Lynn beyond was accessed via Friar Street and All Saints' Church which may be a Saxon foundation rebuilt circa 1090. The nearby Carmelite Friary, developed by the river Nar after 1261, had its own church until it was dissolved in 1538.
South Lynn lacked a weekly market and was a small community when it amalgamated with King's Lynn in 1555. The major merchant family in the parish in the C17 were the Atkins, whose mansion was the Greenland Fishery. On the Nar were shipyards, where town merchants commissioned vessels and watched launches from the roof of the South Gate. The river was the home base of their whaling fleet which undertook annual voyages to Greenland by 1774.
Traffic arriving at the South Gate no longer had to turn left once London Road was constructed as its first bypass, in 1803-06. It became the principal route into King's Lynn and was lined with "handsome houses" and other new streets were "springing up" by 1850. The population of South Lynn grew from only 701 in 1801 to 1731 in 1851. In the Friars area, master mariners formed the biggest occupational group.
After 1950, South Lynn lost both industrial and public Victorian buildings, and medieval houses in Friar Street. The construction of Hillington Square housing estate involved the demolition of C19 streets and Welwick House, a C18 mansion. The designation of a town conservation area in 1969 put the brake on further redevelopment and formed part of the movement to preserve England's historic towns. In 1974 the neglected Friars Area was included within it. 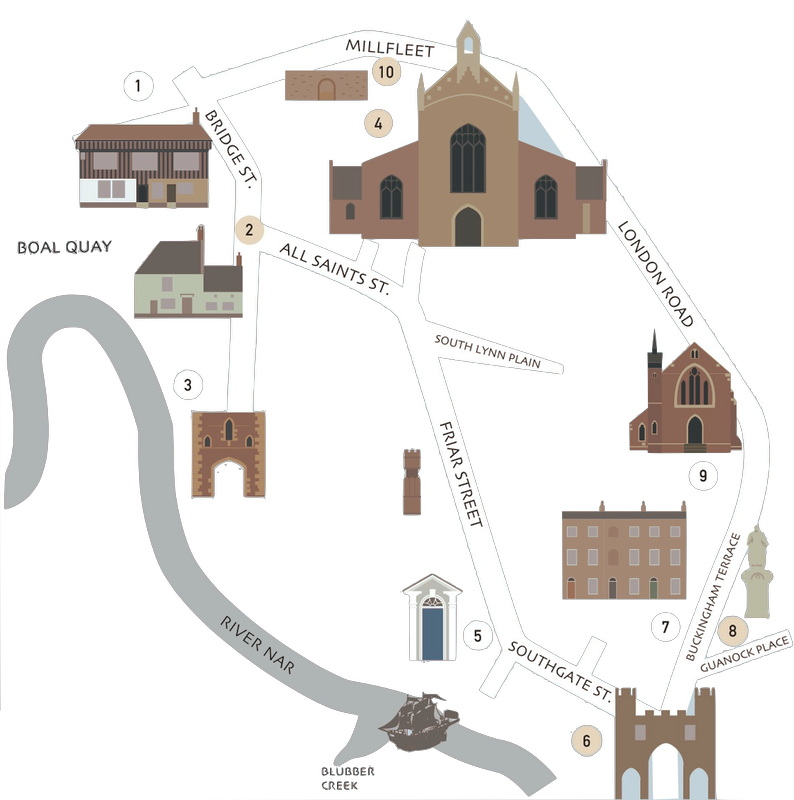 1 Greenland Fishery
This fine house is a half-timber-framed building, built in 1605 by John Atkin, twice Mayor of King's Lynn. Distinctive wall paintings date from this time. It acquired its name in 1796 when it was a tavern used by the crews of whaling vessels sailing to Greenland. It became a museum in 1912 until bomb damage in 1941 led to its closure.

2 Bridge Street, All Saints' Street & South Lynn Plain
At the other end of Bridge Street stands the former Hulk Inn, now the Quaker Meeting House (early C18). Shaped Gables grace two of the C17 houses (nos. 30-36). On the bridge that crossed the Millfleet stood the Chapel of Our Lady (c.1329). The river still flows beneath the road. All Saints Street has mostly Georgian houses with some modern dwellings. South Lynn Plain was a community meeting place where hustings and local elections were held.

3 Whitefriars Gate
The only remnant of the extensive Carmelite Friary, founded in 1261 and dissolved in 1538, is the C15 northern entrance. Friar Nicholas of Lynn, the astronomer, and Friar Alan, befriender and supporter of Margery Kempe, Lynn's famed mystic and pilgrim, were members of the community.

4 All Saints' Church (All Hallows)
The church is the oldest building in the town, with parts dating back to c.1090. It was rebuilt in the late Middle Ages while under the patronage of West Acre Priory. It contained the altars of several guilds, and roofs and an apostles screen survive from this period. Beside the high altar is an anchorhold, the cell of an urban recluse, whose counsel and prayers were highly regarded. The tower collapsed in 1763. One of the fine stained glass windows forms the South Lynn War Memorial.

5 Southgate Street and Friar Street
These streets formed the original southern route into Lynn. Following demolition of its medieval inns, such as The Dolphin and The Goat, most buildings now date from the C18 and C19. A variety of architectural features can be found on the buildings: 7 & 8 Southgate Street share a Doric door case under an open pediment; 47-49 Friar Street have an early C17 serrated chimney; Elsden's Almshouses (mid-C19th) have stepped gables. Whitefriars School and its field are on the site of the Carmelite Friary.

6 South Gate
The town was defended by seabanks and walls from 1266. The South Gate was the most important structure in the town defences and designed to impress visitors arriving from London and the south. It was built of brick in 1438, with a bridge over the small river Esk, and its southern face was clad in stone in 1520. Side passages were added for pedestrians in the C19. Although other town gates were later demolished, the South Gate was retained as a symbol of civic status and pride.

7 Buckingham Terrace
Flanking the imposing and elegant new southern entrance to London Road are the 3-storey brown brick houses of Guanock Place and Buckingham Terrace, dating from 1825. Behind the latter was situated the last Quaker burial ground, on land bequeathed by Thomas Buckingham, a ship owner. It was subsequently leased as a garden and the memorials were removed.

8 Statue of Frederick Savage (1823-97)
The statue recognises the charitable work of this former mayor and fairground engineer and his service to the town. Fundraising by townspeople and showmen raised £400 for the statue was unveiled in 1892, during Savage's lifetime.

9 Roman Catholic Church of Our Lady of the Annunciation
The church was rebuilt in 1897 of carrstone (gingerbread stone) and reused much of an earlier building by Pugin, in particular the stained glass window which he designed. The then Prince of Wales contributed to the expense as the King and Queenof Spain and other foreign royals attended Mass there when staying at Sandringham. The Pontifical Shrine of Our Lady of Walsingham, revived under Pope Leo XIII, is contained in the Holy House which was modelled on the one in Loreto, Italy.

10 The Jewish Cemetery
King's Lynn was once the home of a thriving Jewish community, whose first synagogue in Tower Street was replaced by another in HIgh Street. The cemetery was used primarily by Dutch Jews who lived here c.1750-1846. They moved on as the town became less prosperous. Surrey Street, off Tuesday Market Place, was formerly known as Jews Lane. A small Jewish community remains in the locality.
Powered by